The recently published EPO 2017 Annual Report discloses significant figures relating to the patent landscape worldwide as well as in Europe.

One of the issues in the patent application process has been the delays due to the number of applications and the backlog at the EPO.  According to the report, the EPO has been endeavouring to reduce the backlog of work by processing more work than it has received.  This has allowed faster response rates and therefore greater certainty for applicants.

Applications from the EPO’s 38 member states grew by +2.8% from 2016 and accounted for 47% of the total.  The five most active countries being the US, Germany, Japan, France and China, with China showing yet another double digit increase of +16.6%. 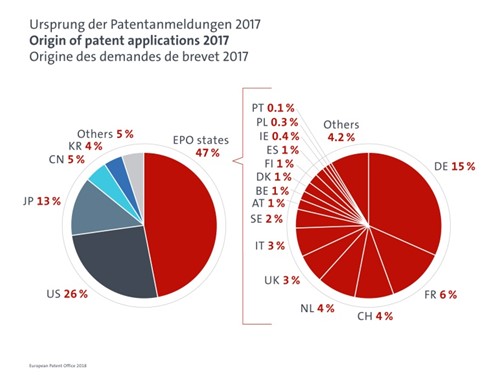 Analysis of the origin of patent applications in the largest fields of technologies have shown that countries such as China and South Korea are progressing into specific areas such as the ICT field, whereas others, such as the US and EPO states, have shown a greater variation of the field of applications.  This provides further evidence for the recent study by the EPO on “Patents and the Fourth Industrial Revolution”. You can find our review on this study here.

The EPO has been actively involved in IP5 initiative which helps global harmonisation and streamlining of procedures, eliminating unnecessary duplication of work among offices.

Overall, Europe continues to export more inventions to the ‘IP5’ regions than it imports, indicating the strong position of Europe in terms of innovation.

The top technology fields where most applications were made are Medical Technologies, Digital communication and Computer technologies.  The strongest growth was recorded by the biotechnology (+14.5%) and pharmaceuticals (+6.2) fields.  Following the report on the Life Sciences Industrial Strategy prepared by the life sciences sector for the UK government, the increased trend in medical technologies in the UK was well-within expectations. 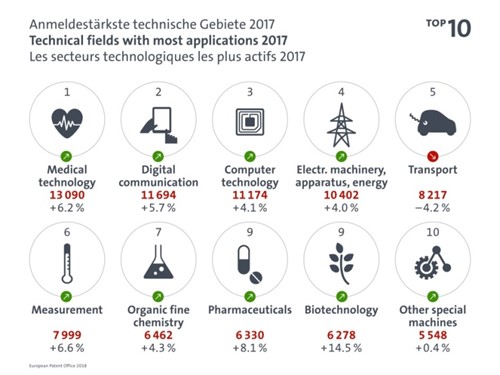 The importance of patents for SMEs is another significant result of this report as one in four applications received by the EPO came from an individual or SME. To further support the SMEs in their patent journey, EPO has also published a set of case studies on European SMEs. These case studies demonstrate how the value of IP can be used in the most effective and efficient way within organisations.

The full report can be accessed here.

We as Wynne-Jones IP are closely following the developments realized by EPO directly as well as through our involvement with the pan-European law firm AIPEX.

The marking and webmarking of patented products is one of the easiest wins in terms of optimising the benefits and protection given by your patent. However, all too often it is either completely overlooked or not done properly. This article explains why you should take marking and webmarking seriously, and how you go about doing it.

Brand Protection & Licensing in the Metaverse

From flexitime to holding meetings in the fresh air, here are five things you didn't know about working at Wynne-Jones.

HR Manager Lucy Gabb attended the Malvern Festival of Innovation Tech Day at the Malvern Hills Science Park to meet GCSE and A-level students and talk about careers in IP.

Innovating to tackle the climate emergency

The annual Malvern Festival of Innovation returns for another edition from the 4th - 8th October 2022 with an evening symposium on Tuesday 4th October devoted to the Climate Emergency.

Martin Hyden, the Head of Sustainability, Partner, Patent and Trade Mark Attorney at Wynne-Jones IP, a Gold Sponsor of the festival this year will join speakers in the panel session. This segment will be an opportunity for the audience to participate in a discussion that may lead to new initiatives and collaborations to take forward within the community.

Proud sponsors of the Malvern Festival of Innovation

Following the launch of our new Malvern office at Bloom Space, Wynne-Jones IP are delighted to sponsor the Malvern Festival of Innovation 2022.

Monday 19th September 2022 has been confirmed as a bank holiday following the passing of HM Queen Elizabeth II.

Wynne-Jones IP will be observing this national day of mourning in order that our team can watch the funeral of the late queen, should they wish.

Wynne-Jones IP joins in paying tribute to Her Majesty the Queen Elizabeth II. Our thoughts are with her family, the nation and the Commonwealth.

Queen Elizabeth II was the longest reigning monarch of the United Kingdom; she was for many an inspiring leader for her dedication and commitment. We will observe events over the coming days and update you once we understand the funeral plans as well as any subsequent public holiday.